by the editor
Queen of Myshuno


This is a slightly edited excerpt from an ongoing legacy save (a multi-generational exploration of the lives of a group of characters and their offspring) in Sims 4 that you can view here: Vintage Newcrest Introduction and Table of Contents.

We start the story in the city of Newcrest. The time is, and always will be, the 1930s, 1940s, 1950s, and 1960s all mashed together. Vivian is bringing coffee to the big bosses in the downtown office where she works as she does every weekday morning. 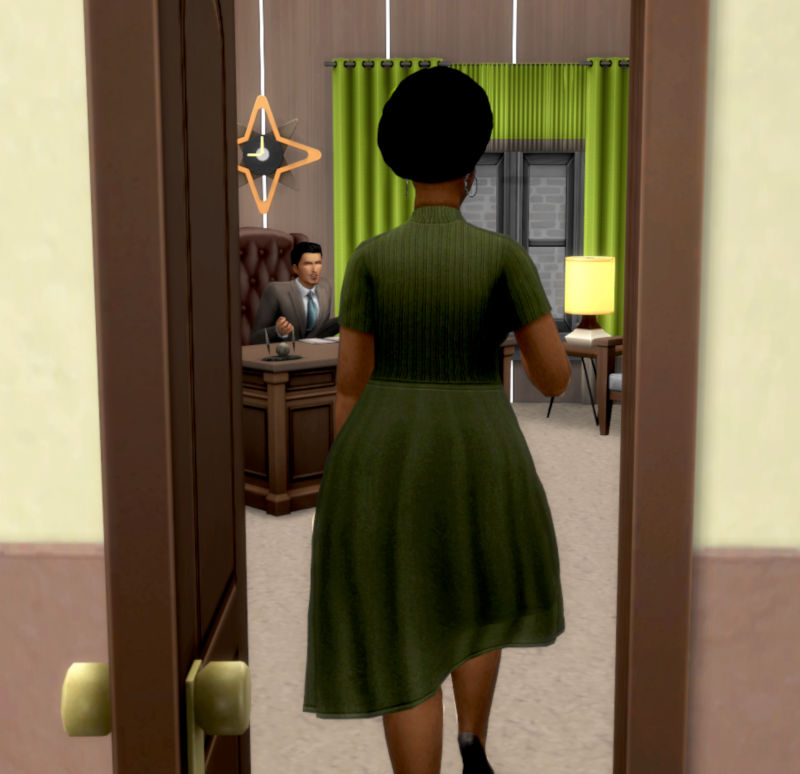 The big boss in the corner office is Mr. Todd. Mr. Todd often gets wound up into a very bad mood. Fortunately, Vivian knows how to handle him. 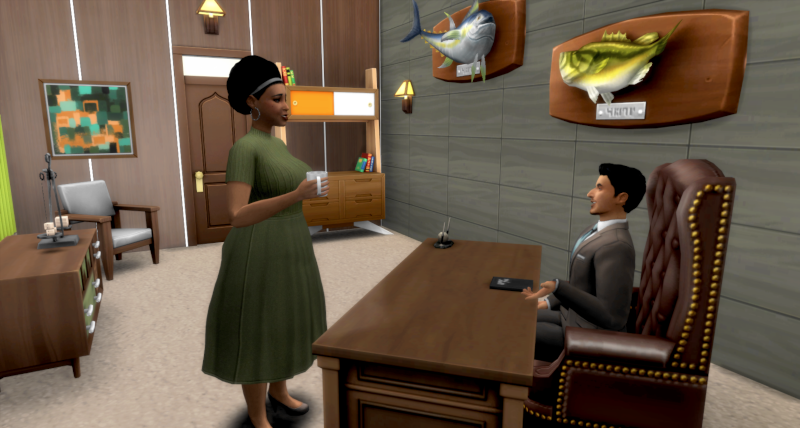 Gavin Todd: Vivian! I heard you went and got hitched.

Gavin Todd: Now, why would you go and do a thing like that, silly girl?

Vivian: (laughs) Oh well, I fell in love, so it seemed like the thing to do. 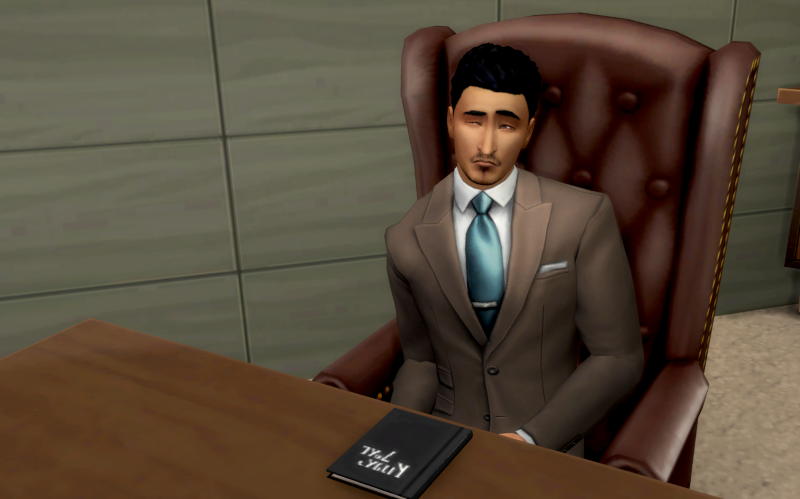 Gavin Todd: Ah, falling in love–even sillier. So tell me, how are things on the floor today?

Gavin Todd: Good. Good. And Shirley. How is she being today?

Neither Vivian nor Mr. Todd are very fond of Vivian's supervisor, Shirley, Vivian because Shirley seems to purposely make working there difficult for her, and Mr. Todd for his own reasons. Vivian has always gotten the feeling that Mr. Todd would like to catch Shirley doing something he could fire her for, but unfortunately for them both, Shirley is a hard worker. 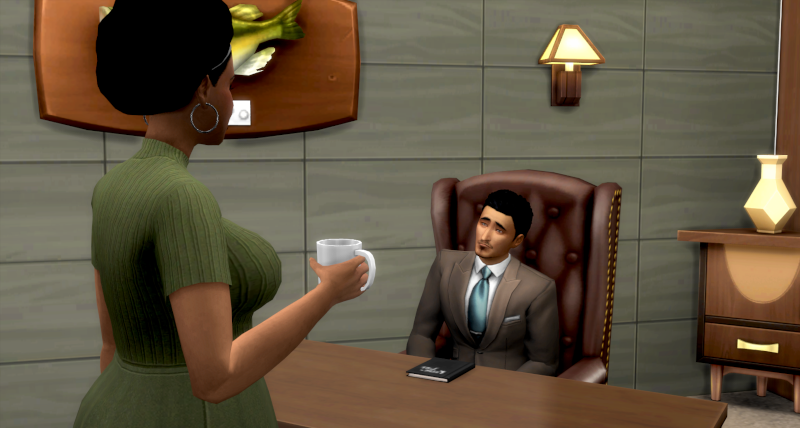 Gavin Todd: Yes, I see.Well, I suppose you’ll be getting yourself in a family way and leaving us soon. 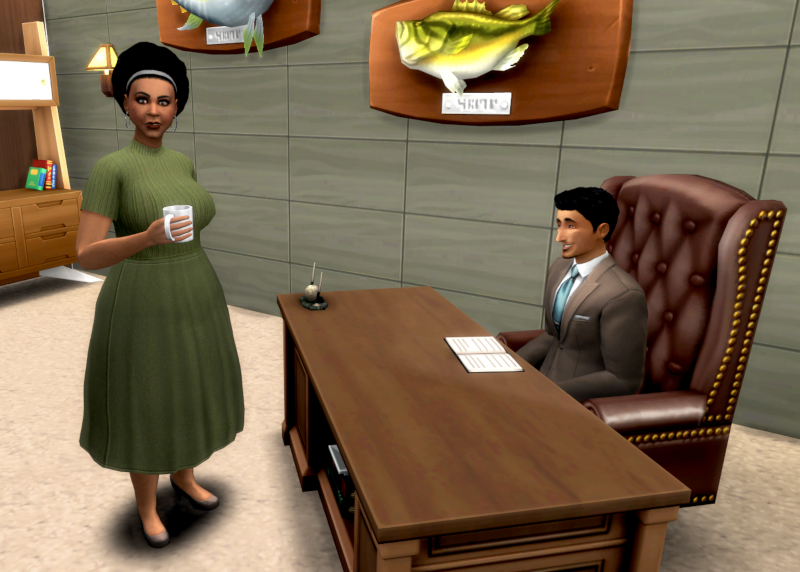 Gavin Todd: You know, they have a pill that cures that now. You should consider staying on here as a career, Vivian. I value your service and could promote you if you keep yourself out of trouble.

Vivian: Um…I appreciate that, sir. Well, speaking of work, I’d better get back to my desk. Shirley has me processing the G92 forms, and she wants them right away.

Vivian puts the coffee cup down and hurries out of the office.

Vivian: What just happened? Did Mr. Todd just seriously refer to pregnancy as getting into trouble and something to be cured?? And, more importantly, did he just tell me to use the birth control pill??

Chapter 2: A Beautiful Flower for a Beautiful Bride

Manny gets home slightly later than Vivian on their first day back to work after the honeymoon. Vivian is starting to prepare dinner when he comes in. Manny walks into the kitchen, stops, and stares. 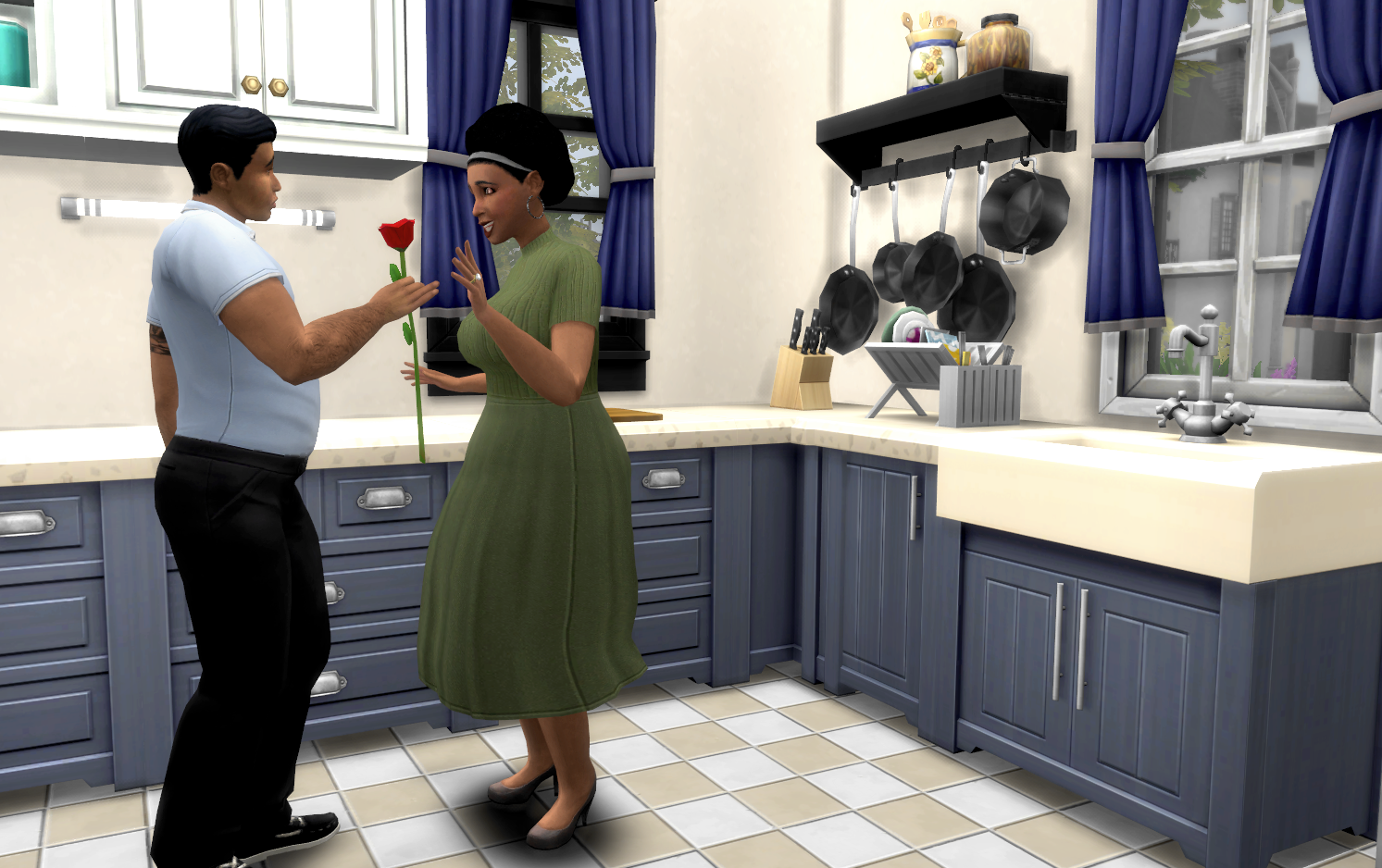 Vivian: What is it?

Manny: You’re more beautiful than the day I married you.

Vivian: (laughs) Oh, stop it. That was less than a week ago. I look exactly the same.

Manny: (pulls a rose out from behind his back) A beautiful flower for a beautiful bride. 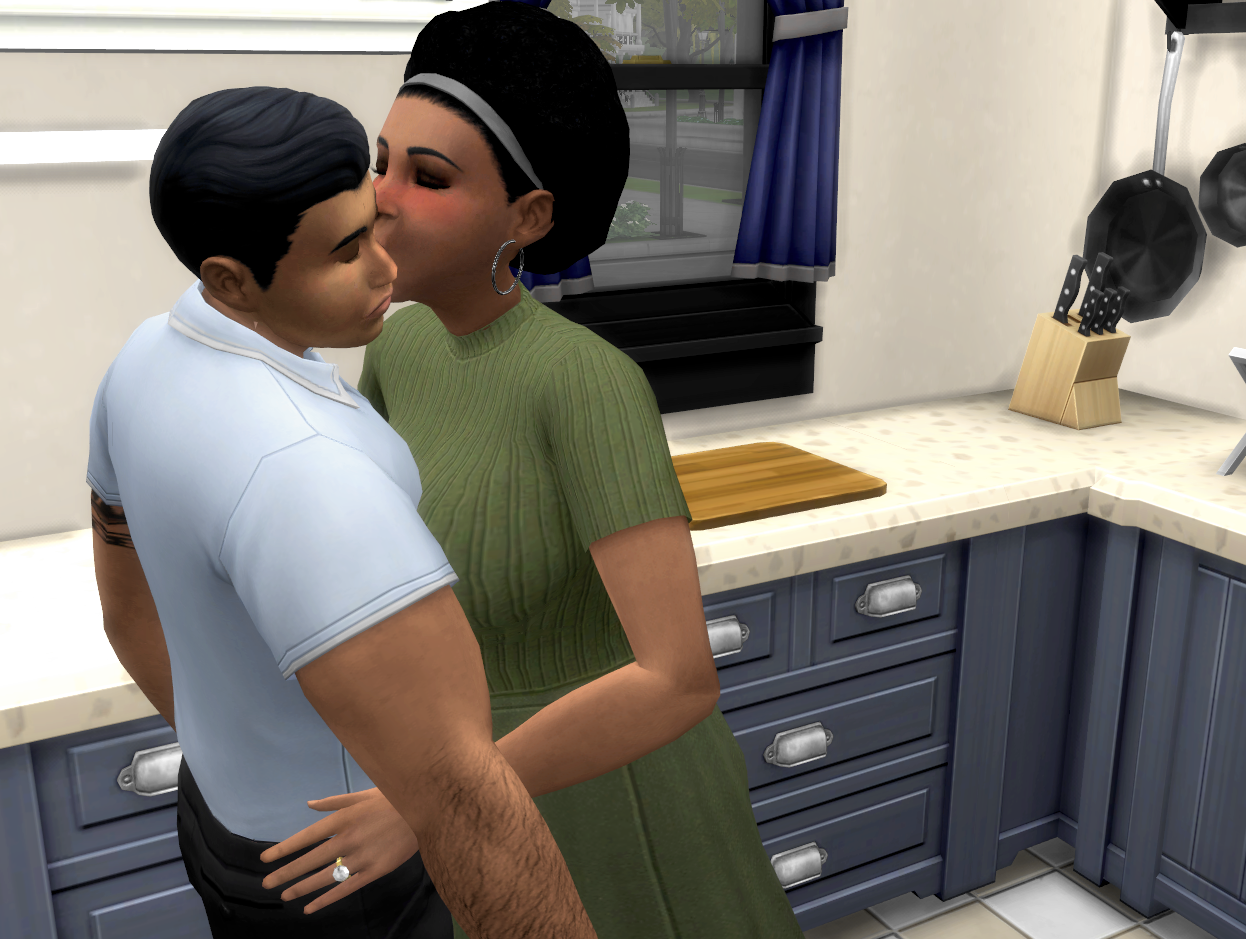 Chapter 3: How Was Your Day?

Vivian and Manny sit down to eat dinner after their first day back to work following the honeymoon. 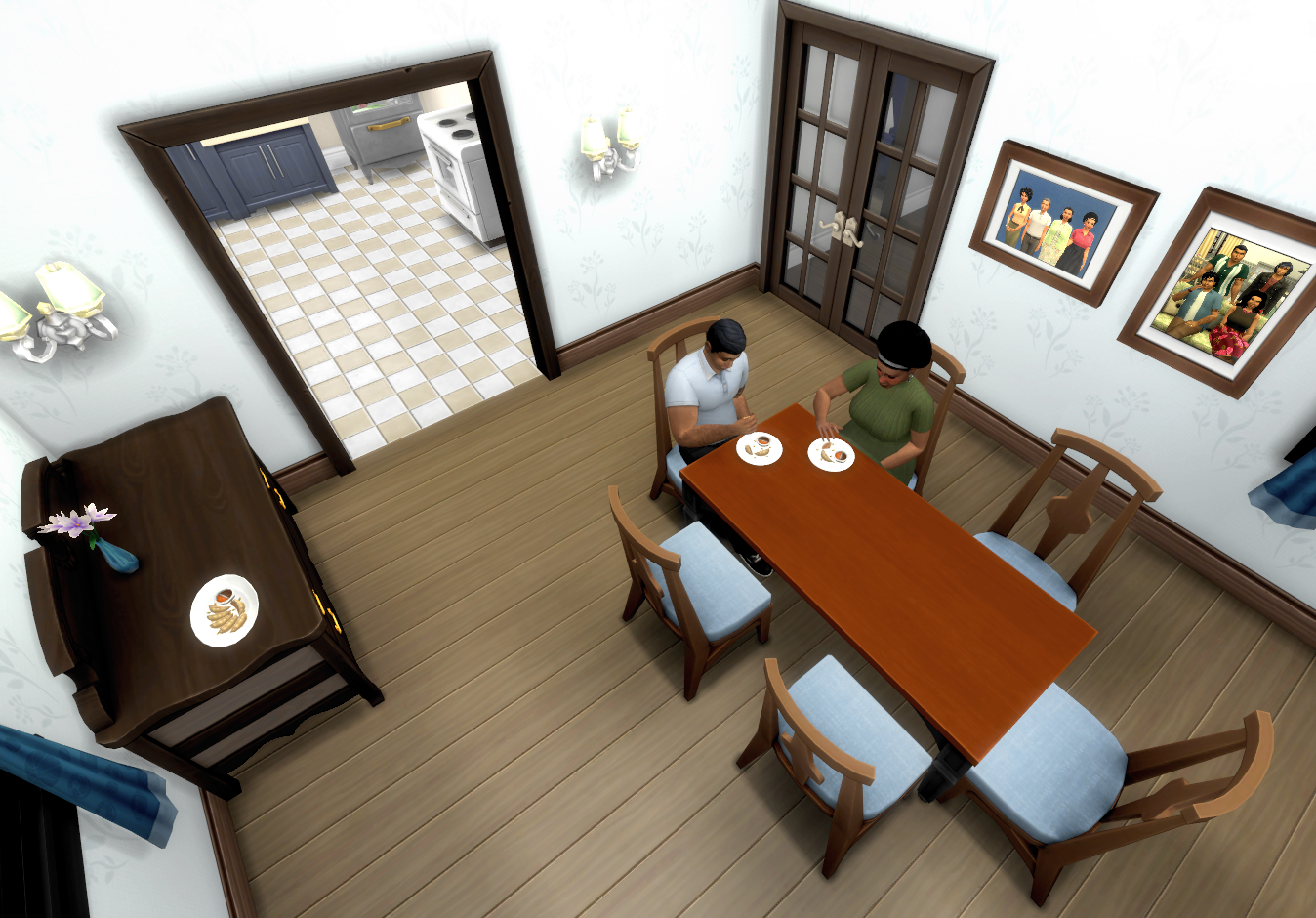 Vivian: How was your day

Manny: It was good. Not too busy, not too slow. We had the cutest little girl come into the store today, and I helped her pick out a toy. It made me nostalgic for when we have children. I mean, not nostalgic because that’s in the past, but…

Vivian: Nostalgic for the future?

Manny: (laughs) Yeah, exactly! Nostalgic for the future. How was your day, darlin’? How was Pickleface?

Pickleface is Vivian's secret nickname for her supervisor, Shirley. Vivian: She was her usual self, ordering me around and being dramatic about it.

Manny: So what you’re saying is nothing has changed.

Vivian: Well, one new thing happened today, and it was a little creepy.

Vivian: Mr. Todd tried to bribe me with a promotion on the condition that I don’t get pregnant.

Manny: What?! Did he actually say that?

Vivian: In a round-about way. He went so far as to bring up the pill, calling it a “cure” for pregnancy, as if having children is some kind of disease.

Manny: (goes silent for a moment) What did you say to him?

Vivian: I didn’t say anything. I just got out of there as fast as I could. It made me so uncomfortable. 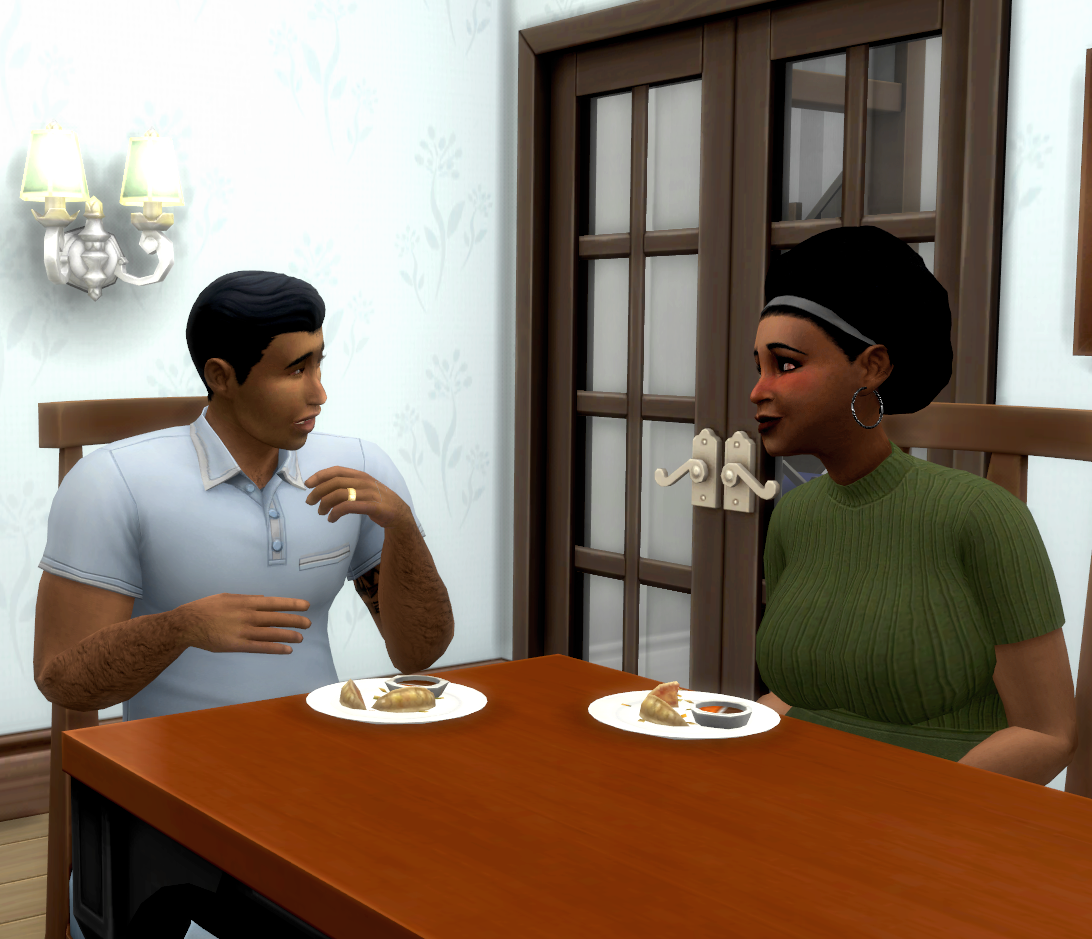 Manny: You know if you want to quit now or at any time, I’m fine with that.

Vivian: I know. I just really want to save up some money for our vacation to the Sulani islands and for our future family. I can stick it out for another year.

Manny: If he says anything else that makes you feel uncomfortable, let me know.

Chapter 4: Drinks with the Boys Manny meets with his buddies at the Aqua Bar in Newcrest. Joey: So, Manny. I thought you’d look more relaxed after becoming a married man, but you seem kind of tense tonight.

Manny: Who, me? No, I’m just tired after working on the house all day, that’s all. But now that you mention it, there is one thing that has been weighing heavily on my mind.

Manny: (smiles) Well, I’ve just been wondering what happened between Ken and that go-go dancer the other night? (Manny points upward, referring to the Gentleman’s Club one floor above the bar, where they had all recently gone for his bachelor party.) 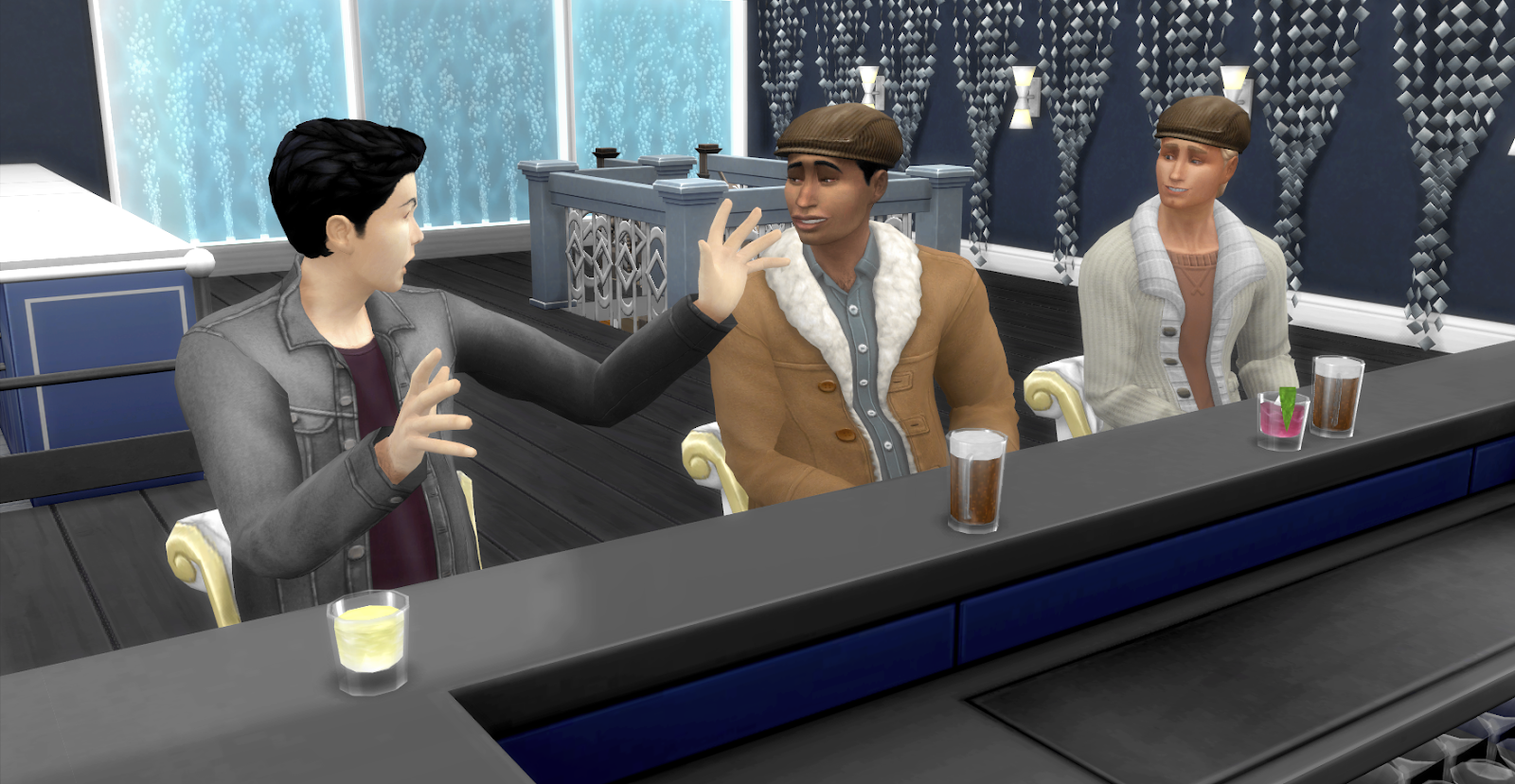 Ken: Oh, man. That go-go dancer was so into me. She was all over me.

Manny: Did her being into you have anything to do with you giving her money?

Ken: No, no. It wasn’t like that, man. She just knows a good thing when she sees it.

Joey: But you did give her money?

Ken: Well, she’s trying to work her way through school, so yeah, I gave her some cash, but that was totally unrelated.

The phone behind the bar rings. 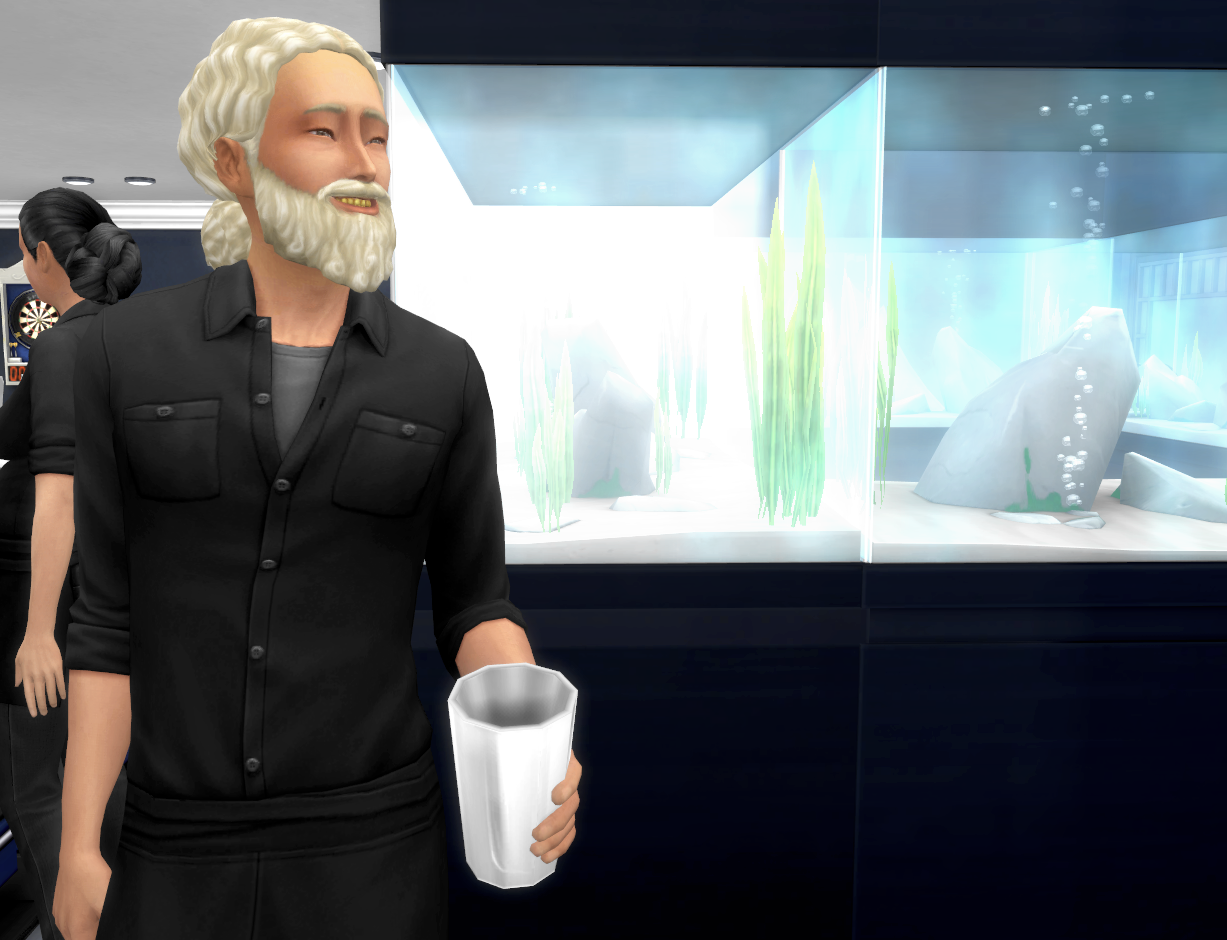 Nobody at the bar responds, and the bartender hangs up the phone.

Manny: I’ll be right back. I need to go check the parking meter.

Joey: Since when do you own a car?

Manny: I borrowed my dad’s car.

Joey: So you’re just going to leave me here with this lunatic? (referring to Ken)

Ken: (joking) At last, me and Joey get some alone time. Get out of here, Manny. 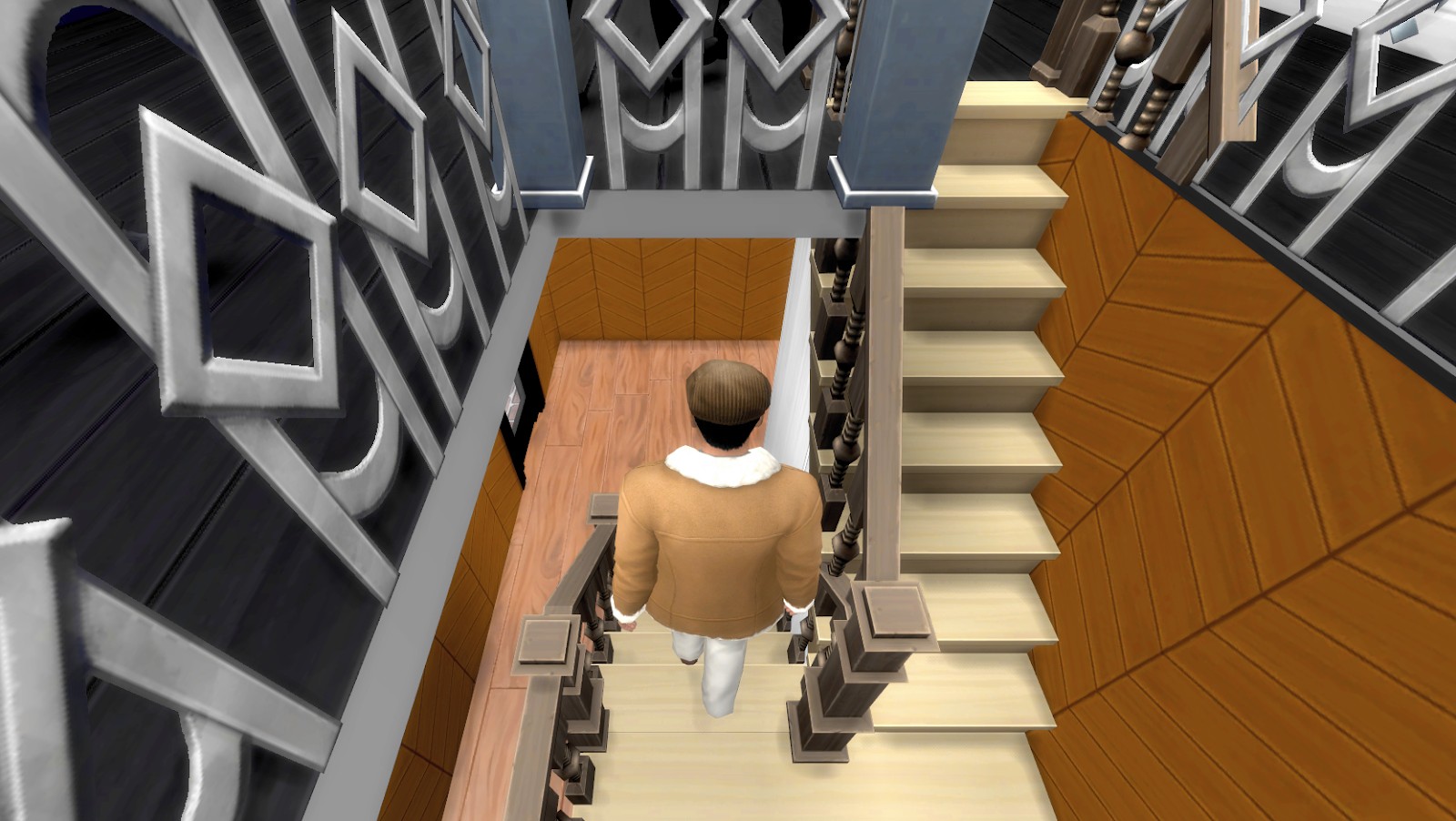 Manny heads down the stairs, but he doesn’t go to the car. Instead, he looks around to make sure nobody’s watching then stops in the stairwell to talk to Crystal, one of the dancers from the Gentleman’s Club upstairs. 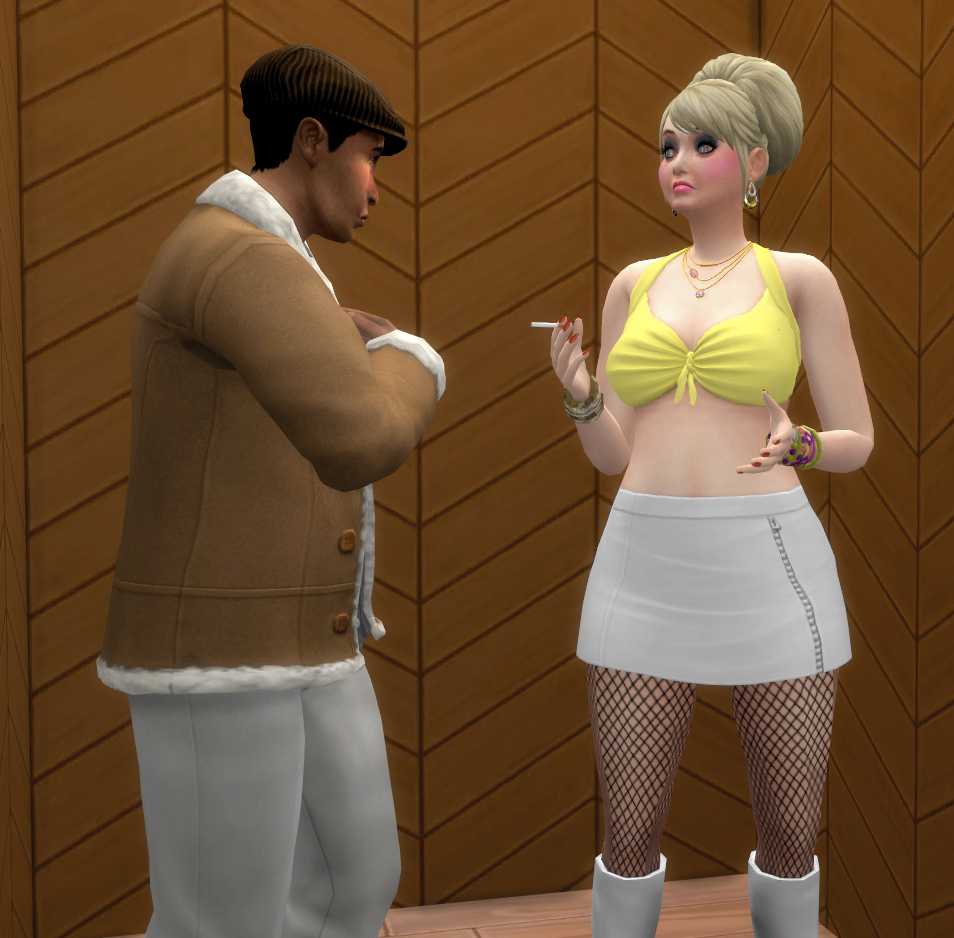 Crystal: I could get in a lot of trouble for this if anybody finds out.

Manny: Don’t worry. Nobody is going to find out. (He reaches into his coat pocket and pulls out some cash.) This should cover it.

Crystal: Who is Barry Allen anyway? Why didn’t you just have me ask for you?

Manny: He’s nobody; he’s a comic book character. I needed a signal to know when to come down without anybody knowing what I was really doing.

Chapter 6: Your Face, This Concrete--They Should Meet 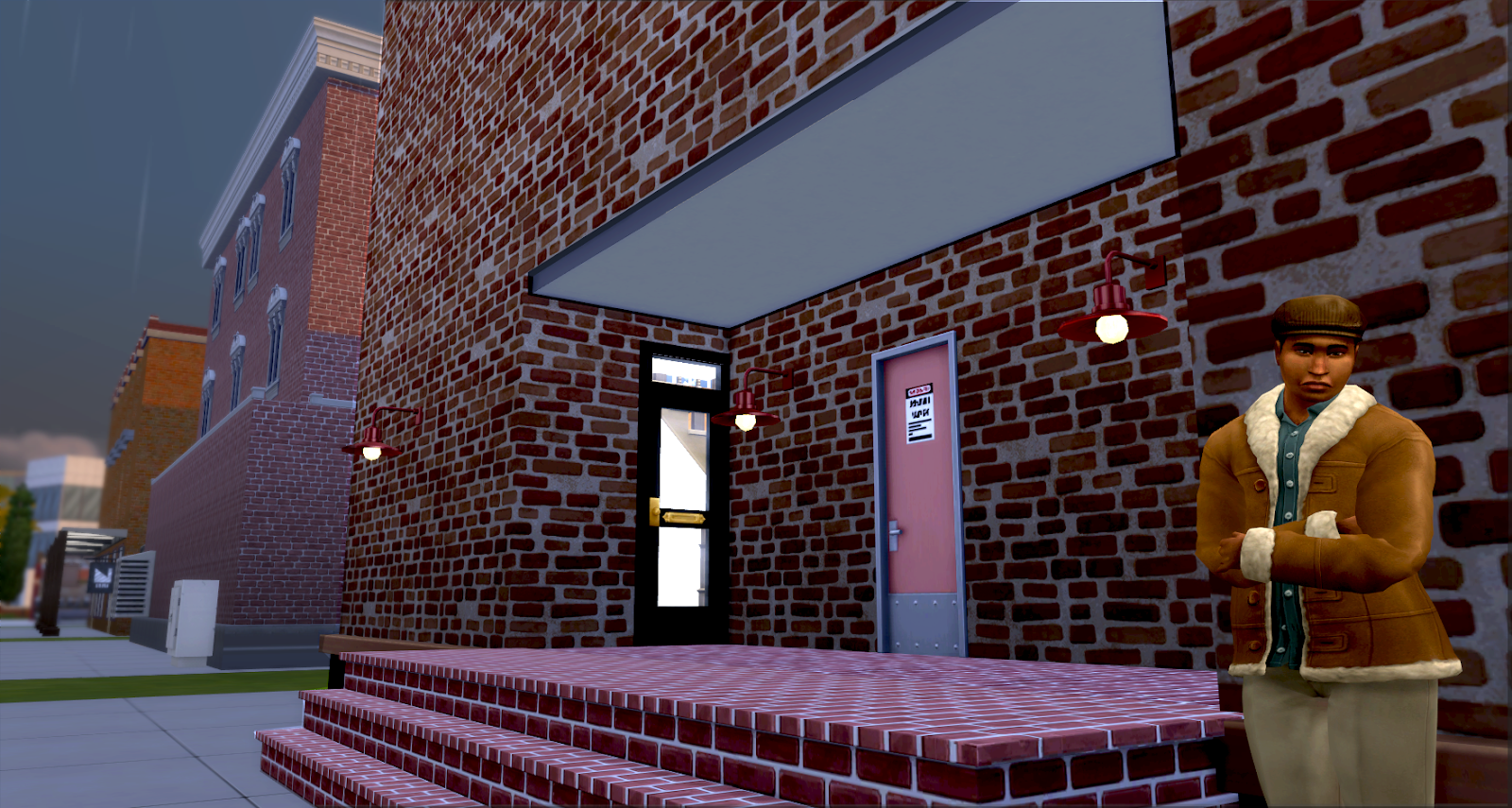 A low rumble of thunder rolls across the evening sky. Manny waits in the drizzling rain in the alley behind the building. 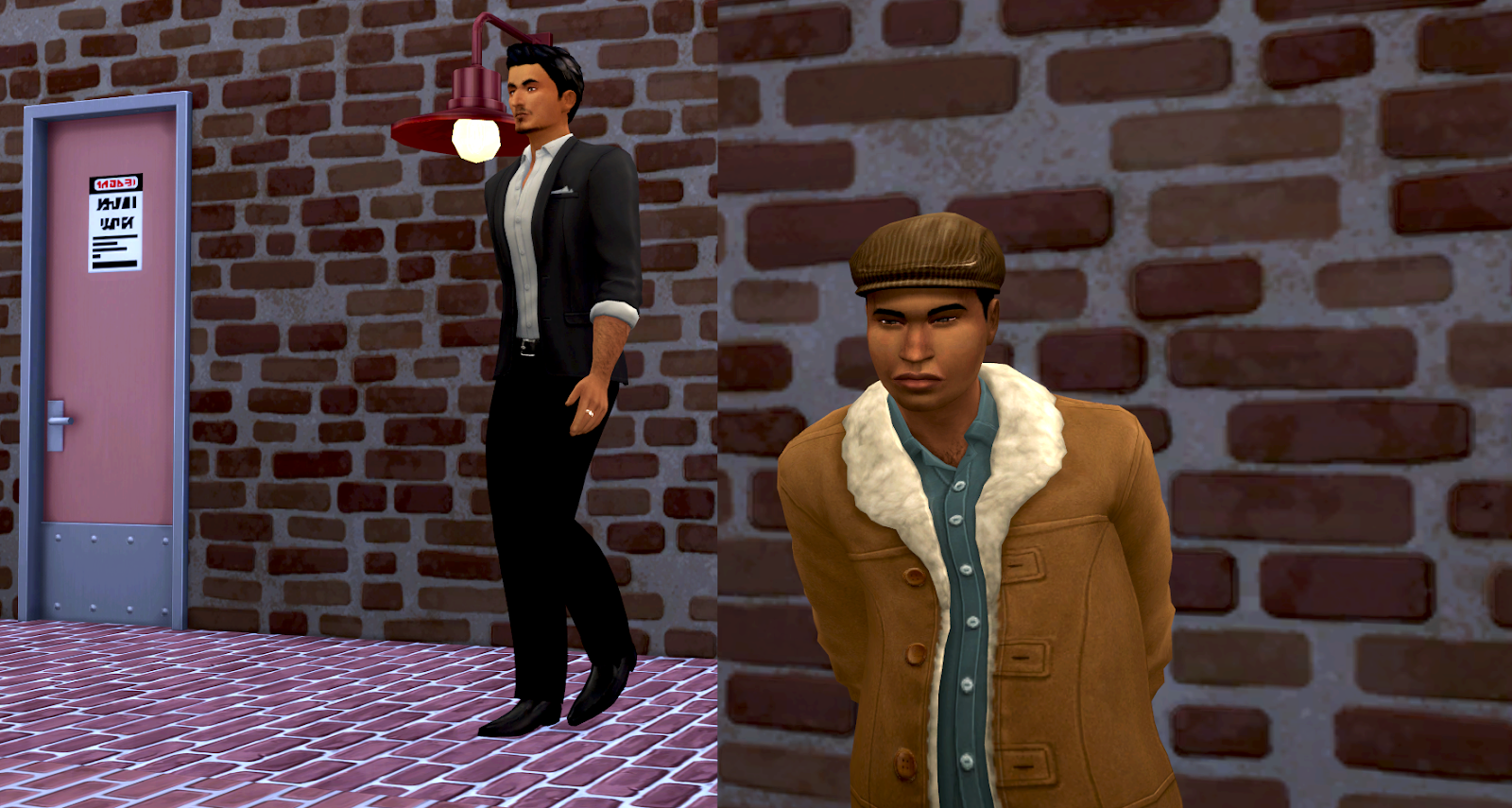 Gavin Todd exits the door that leads to the Gentleman’s Club stairs. He’s right on time–Manny has only been waiting 5 minutes, just like the girl had said. Gavin opens his umbrella and walks into the alley. Manny steps out of the shadows, blocking his way. Gavin: (confused) Vivian…Vivian…I’m not sure…

Manny: She works for you at Newcrest Financial.

Gavin: Oh, that Vivian! At first I thought you were talking about one of the girls upstairs, but I couldn’t remember any of the dancers being named Vivian. (laughs) So you’re the guy Vivian married. I had no idea you two were an item. Congratulations. Well, what a coincidence running into you. Manny: It’s not a coincidence. I was waiting for you.

Manny: Don’t be. I’m very protective of my wife. She told me something happened at work that made her unhappy. And when my wife’s unhappy, I’m unhappy.

Gavin: Now see here, there must be some mistake. I’ve never made a pass at Vivian.

Manny: No, but you crossed the line when you talked to her about her family life and about getting pregnant. 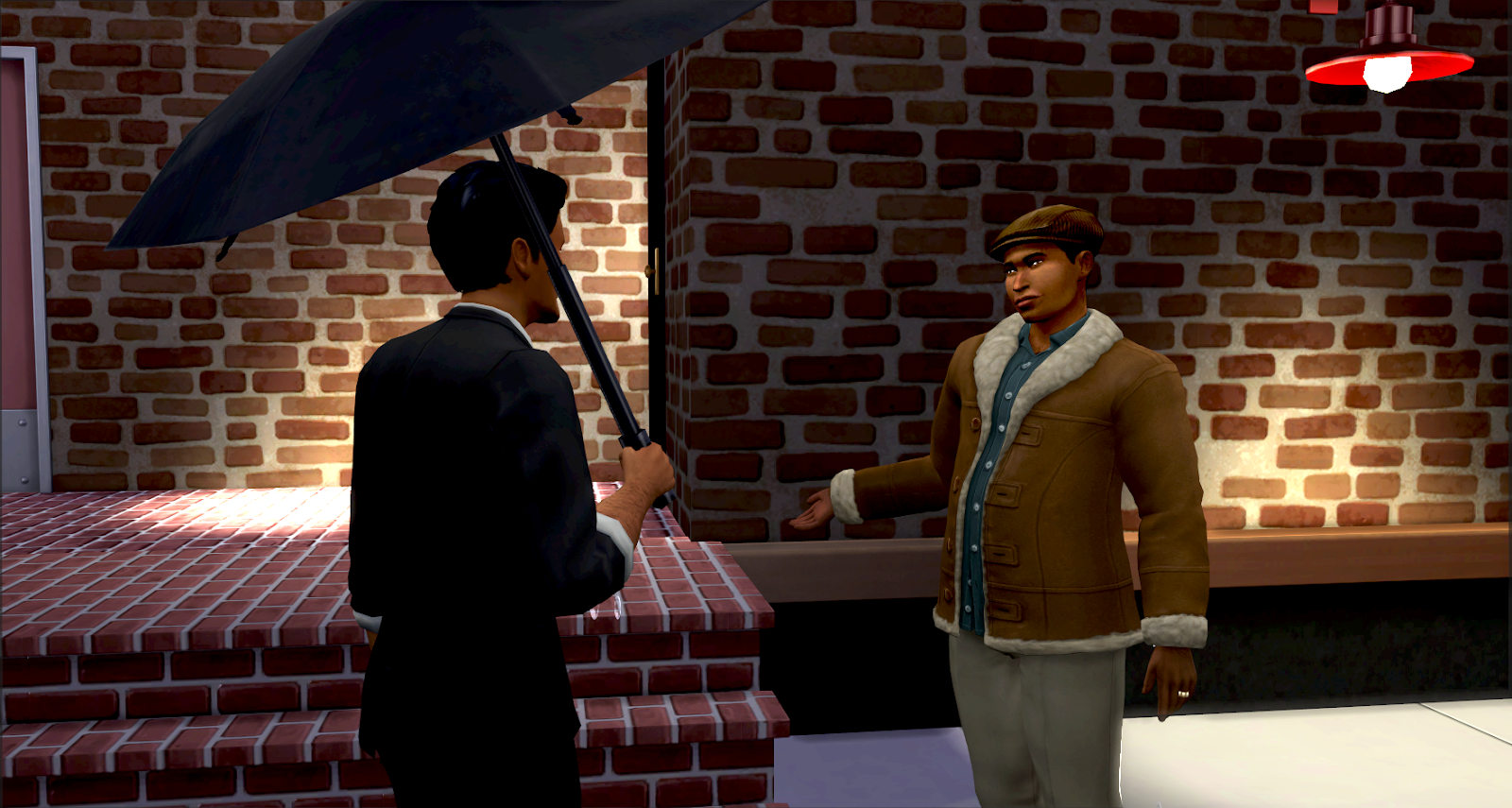 Gavin: Oh that. Look, I was only trying to help. I like Vivian; she’s a good worker. Sometimes when you meet with people in a business setting, the talk gets a little personal because there are things you need to know as an employer and…

Manny: Let me stop you right there. From now on, your business meetings with my wife are going to be just that–about business. You don’t say anything to her about kids, marriage, her personal life, nothing. Otherwise, I’m going to help this concrete have a personal meeting with your face. And another thing. Vivian doesn’t know I’m talking to you, so you’re not going to say anything. Got it?

Gavin: (opens his mouth as if to argue but changes his mind) Got it.

Satisfied, Manny goes back upstairs to rejoin his friends at the bar.

See more from Queen of Myshuno on her Tumblr.

Queen of Myshuno has published work in various journals and online magazines. One of her favorite animals is the fruit bat. She once wore only neon for an entire summer during the early nineties.

This writer gets paid in comments. Please leave one now. :)

Email ThisBlogThis!Share to TwitterShare to FacebookShare to Pinterest
Labels: story 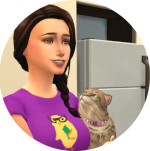 I have the bookworm trait! I graduated from the University of California, Irvine, with a degree in English. Publications of my poems and short stories include: Atlantean (Scary Poetry Collection), Bouillabaisse, Dead Flowers, Nail Polish Stories, and Prairie Winds, among others. Read Full Profile 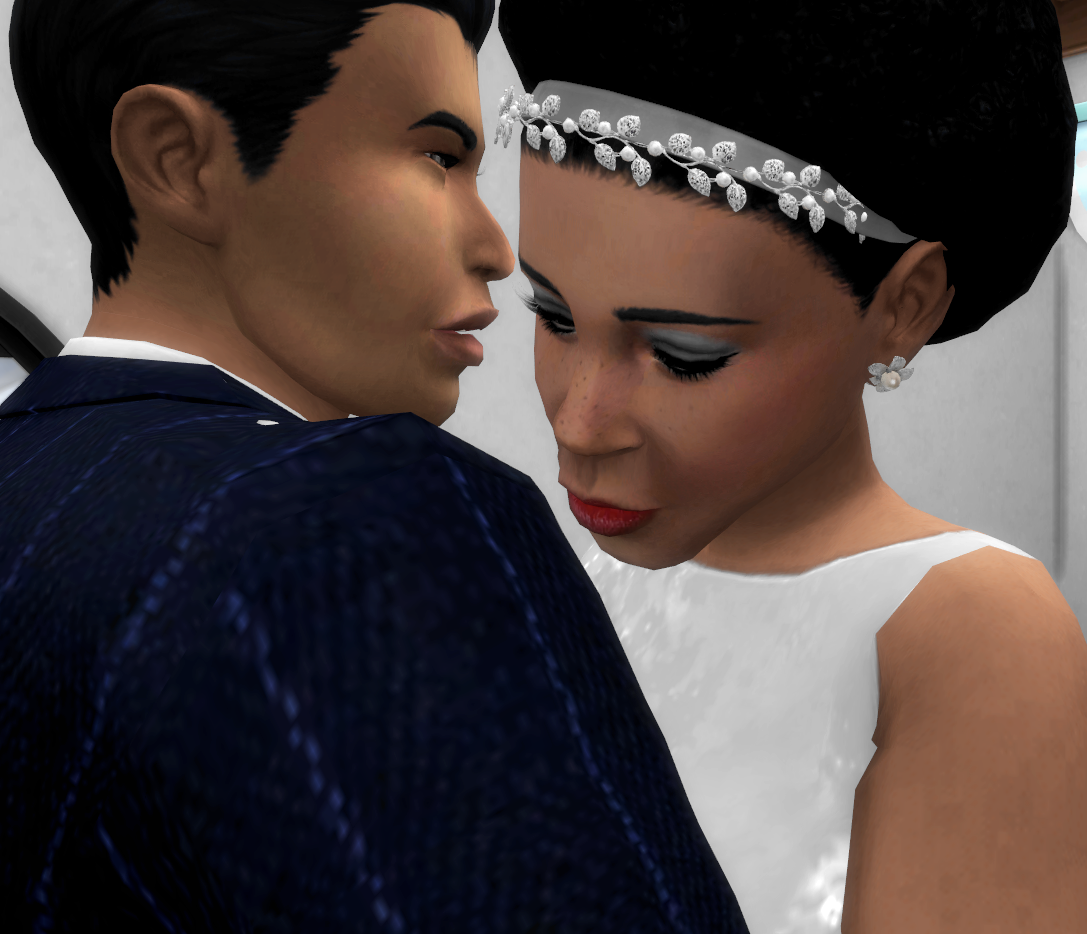 "“Reality is broken. Game designers can fix it." --Jane McGonigal